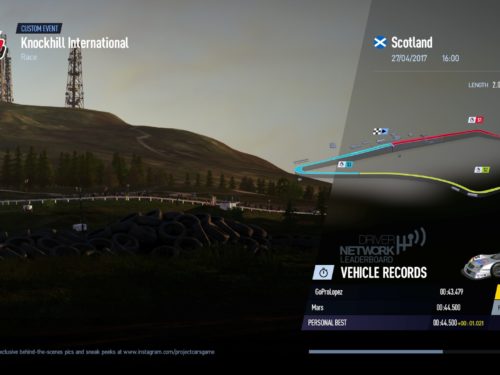 The first of the circuit I am going to write about is Knockhill International. I chose this circuit as a test circuit for testing cars and setting them up because it is quite short – 2.092km and with most of cars it can do it under one minute, so I know if I managed to improve or worse the settings in a moment. Originally I wanted to test cars on the Brno circuit but it’s pretty long and it takes almost 2 minutes for one lap. Anyway, this is a very interesting circuit with nine turns and one of them is chicane. There are three turns on the circuit which affect the final time most.

The very first turn at the end of the starting line is insidious (I’m talking about the standard direction, reverse direction is also possible) and it’s just one of the three crucial turns because it’s downhill and can not be seen. I recommend to go into it with caution in the case of a mass start because the half of the racers regularly crashes here. This is a right-hand turn of about 110° to 120° so inbound speed is high but due to swinging the cars lose pressure and like to go into oversteering slide (perhaps all GT3). It follows a left-hand turn of about 110° to 120° which can be ride really fast and if the first turn was passed correctly its passage should not be more difficult and it is followed by right square turn which can already make trouble – you need to get to the right direction after the previous turn. Then we can go under full gas to the fourth turn which is again about 110° to 120° and can be passed through the gas on the floor.

Behind it follows the chicane that is at the end of the climb and the cars are without pressure on its top and some cars can jump (watch out not to leave track). It’s just one of the three deciding turns on this circuit. It is necessary to get as much as possible to the left margin at the right time (some go up to the gray area, but it is 50/50 penalty which does not matter when trying to make the fastest lap, but it could do problems in the race) then turn to the right before the mentioned wheel lifts.

After a medium-long straight line, another of the decisive turns is followed, and the turn is 110 ° to 120 ° turn-back to a slight climb. Once again it is necessary to solve the lightening of the car and thus the loss of the pressure and it is necessary at the right moment to be as far left as possible and then to get to the right edge. Long straight with a slight left-hand turn which can be driven under full gas folowed by right acute at the end. It’s quite a difficult turn, but it’s not as complicated as the three mentioned before. Finish line follows after this turn.

Here is a video with one of my fastest attempts (at the time of posting it was the sixth fastest time on a given GT1 category circuit):